Accepting and Activating Your Change 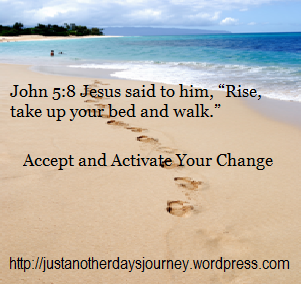 Change is a challenge for most people because it reminds us that time does not stop for anyone (including us).  We fight against the potential of change because we have learned the “ins and outs” of our present situations. We push back against change because it tells us that our celebrated pasts are now over and we aren’t sure if we have another victory in us. We try to stop change because we think that it will prevent the inevitable from happening.

The truth is that change is happening all around us every day but it’s that one thing that we just have to stop. We are not sure what we can expect in the next step. I have a “friend” who was challenged with change so much that he laid paralyzed by both his past and present circumstances. He actually wanted to change but fear of the unknown kept him at the door step of his change. He was lost in his thoughts of different scenarios about what was next.

When questioned about if he really wanted change in his life he made excuses about why he had not taken the first step.  He said that he did not have anyone to help him– never mind that someone helped him to this point. Then he shared with this Person that every time he tries to move forward someone jumps over him–never mind that there were people who had passed him up on his way to this point to change. He forgot that he never stopped.

His fear made him temporarily forget how resourceful he was. He had made it through all these obstacles and challenges because of his determination to change. Ironically when faced with the real moment to change, he became paralyzed by fear. Fortunately for my “friend” the Person that asked him the question told him to just get up and do it. In short, He told him to stop thinking about the possibilities in the change and just do it.

My “friend” was so worried about the past coming to an end that he did not focus on the next thing. He did not focus on all the great possibilities for his future. He only saw the negatives and not the positives for his future. He counted himself out before he ever got started. He unfairly compared his present self to his future self. This Man, which my “friend” talked to, reminded him of his purpose for going to the place where they met. Sometimes we need to be reminded of why we are at the point to change.

We cannot stop time. We cannot thrive on past successes if we are not using them to propel us to our next journey of success. We cannot stop life from happening by not participating. We have to keep living and keep moving forward like my “friend.” He found truth in the words spoken to him by this Man that he never met before that day but he accepted the challenge to move to action by faith.

My “friend” could have easily told the Man that he was crazy and just continued to lay there unchanged. He could have made more excuses on why getting up would not work but he did not. Something inside of him wanted that change more than he wanted to stay the same. Maybe he realized that making an attempt at change could not hurt any more than him continuing to lay there unchanged? Maybe he realized the power and authority of the Man speaking to him. Either way he got up.

My “friend’s” struggle is like many of us today. We are at the edge of our change almost trying to talk ourselves out of moving forward. We tell ourselves all the reasons that it won’t work even when God has told us that He knows our end. We are looking for some guarantees that there will not be any challenges along the way. We forget that His Word says that all things work together for good (ref. Romans 8:28).

I’m so glad that my “friend” listened to the Person that told him to do what he came to do. Yes. Change is challenging but with the right motives and effort, it is possible to achieve.

Just another day’s journey of accepting and activating my change. Peace.